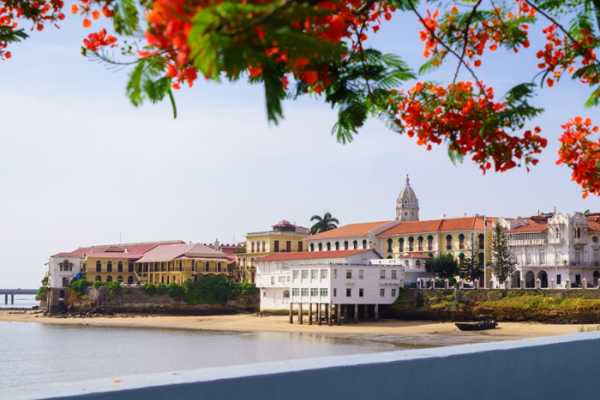 Most visitors come to Panama to see the Panama Canal. On this tour, we will show you both the Canal and the City highlights. Panama Canal: You will visit the Miraflores Lock which is located at the Pacific entrance to the Canal where you can experience this magnificent architectural masterpiece and have breathtaking views of the ships transiting through the 8th wonder of the world. Amador Causeway, a leisure paradise with restaurants and bars that offers spectacular views of the modern city, its skyscrapers and the entrance of the Panama Canal.  Caso Viejo: In contrast, the oldest sector of the modern Panama City founded in 1673, has a charming mixture of colonial architecture, cobblestone streets and ethnic diversity. UNESCO has named this area “World Heritage Site”. It contains a wealth of history in its churches, museums and streets carefully restored to their former colonial beauty and is also home to the Presidential Palace, the National Theatre, the 17th century Church of the Golden Altar, Las Bovedas, church of San Fransisco, the National Cathedral, the Independence Square and much more. Cerro Ancon: Along the way, we will drive up to Cerro Ancon to Admire the views of the City from this lush green hill side with varieties of wild life and birds. 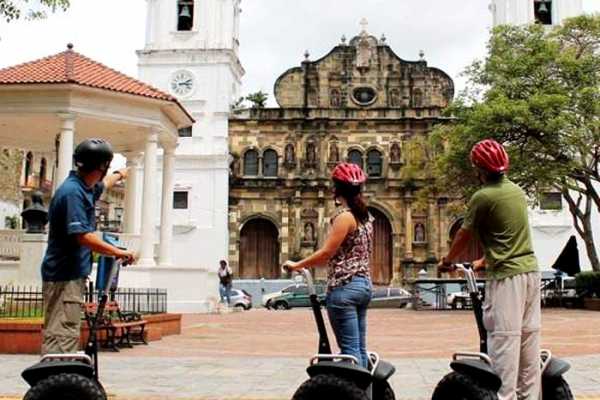 A Segway tour in Panama is a very different and fun way to experience the highlights of Panama City, its history and natural areas using our eco-friendly Personal Transporter. This is the most fun you can have while standing up! You quickly learn how to stand & ride new Segway's X2 and review all safety issues. Join us for a 90 minutes ride, a combination of panoramic-historic tour, on Panama City´s new coast-line and the Colonial City and get to know one of our World Heritage Monuments (Casco Antiguo). 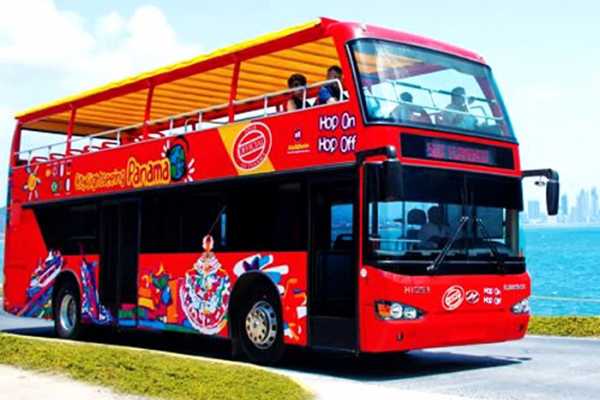 See Panama City from the top deck of an open top tour bus.  The tour is designed to ensure that you see all main attractions beginning with the World famous Panama Canal and including the colonial city of Casco Antiguo. Visit the islands that are connected by a Causeway. From here you will experience great views of the Panama Canal entrance and the Bridge of the Americas, as well as stunning views of the Panama City skyline and skyscrapers. On the way to the islands, and at the entrance of the Causeway, is the amazing Frank Ghery designed Bio-Museum As well as taking in Panama´s key places of historical interest, you'll also visit shopping areas like the Albrook Mall, which boasts brands from around the world, sometimes sold at bargain prices. So, climb aboard with this full-day ticket and explore Panama City the way you want to see it! The service has bilingual commentary (Spanish-English) Your ticket allows you unlimited use, meaning you can hop-on and hop-off as many times as you like at any of the designated stops! 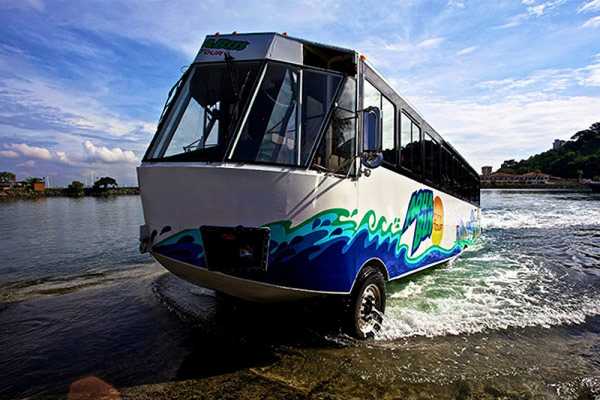 The Aquabus is an amphibious vehicle inspired by the old U.S. Army model, the DUKW, originally designed to carry troops and ammunition to places where there were no docks. The Aquabus has a capacity of 46 people, a top speed of 8 to 10 knots and maneuvers between 150 and 200 meters from the coastline. The tour operates twice daily at 10:30 am and 2:00 pm and last two hours The service has bilingual guides (Spanish-English) and goes from Albrook Mall (Dolphin Lobby), along the Coastal Beltway beside the Bay of Panama to Panama Viejo then on to the Casco Antiguo, the Amador Causeway at the entrance to the Panama Canal and the Administration Building. The aquabus enters the water on Avenida Balboa for a trip on the Bay and returns to the same spot. It again takes to the water at the Playita in Amador and sails to the entrance of the Canal, giving its passengers a unique view of transiting ships. Itinerary is subject to change due to weather, low tide conditions and city events